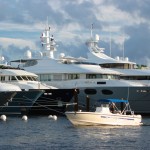 EnviroCare embraces change as a natural cycle of progress and expansion. To make sure change has a positive outcome, EnviroCare supports involving all parties that may be motivated to find a fair solution and mitigation measures for any negative impacts. The ultimate goal is to achieve a balanced outcome.

Due to the demand for high-rise residential waterfront properties in early 2000, marine businesses were disappearing quickly. During this time, Susan Engle was President of the Marine Industries Association of South Florida (MIASF). Under her leadership, she worked with the community to find understand the importance of working waterfront businesses Palm Beach County took an active stance and issued a local bond to benefit specific waterfront acquisitions. The MIASF and Catanese Center for Urban & Environmental Solutions at Florida Atlantic University in turn developed a Marine Master Plan. The Plan engaged the cooperation of local municipalities and the marine industry to provide a countywide framework to address issues, set goals, and take action to show the importance of retaining and expanding working waterfront facilities. The dynamic action plan was to ensure the long-term sustainable growth of the marine industry in South Florida. Throughout the process, Susan Engle served as Chair of the MIASF Marine Master Plan Steering Committee. The committee was comprised of local marine industry, government, and agency leaders who volunteered to oversee, guide, and direct the progress through implementation.

On behalf of the Marine Industries Association of South Florida (MIASF), EnviroCare worked with Broward County’s Environmental Protection Division (EPD), Environmental Groups, Florida Fish and Wildlife Conservation Commission (FWCC) and the U.S. Fish and Wildlife Service to finalize Broward County’s Boat Facility Siting Plan (BFSP), which was the last element in obtaining a Manatee Protection Plan. The Plan’s approval meant Broward County’s three (3) year moratorium on new boat slip permits would be eliminated. A subgroup was established to provide specific documentation and feedback to the governing bodies. This subgroup was comprised of representatives from the Audubon Society, Independent Green Party, Nova Southeastern University Oceanographic Center, MIASF, Broward County EPD, Serra Club and Save the Manatee Club. The goal was to provide the environmental agencies with information that demonstrated a positive correlation between increased slips and manatee movement throughout the county. In order to reach consensus a slip fee was imposed by the Broward County Commissioners to fund a marine patrol officer, a new county employee to oversee Broward’s new Marine Facility Operating License and aerial fly overs during manatee session.

During Susan Engle’s eight year tenure as Broward County’s Florida Inland Navigational District (FIND) Commission, she initiated Broward’s Deepening projects for the Dania Cutoff Canal, the Atlantic Intercoastal Waterway (AIWW) and the New River. She began the process by engaging the U.S. Army Corps of Engineers to conduct a Project Management Plan to determine the feasibility of improving navigation for larger vessels. In 2006, Ms. Engle obtained the support of the FIND Commission to pursue the deepening project as one of FIND’s first internal projects. The project was designed to excavate both Dania Cutoff Canal and the AIWW from their existing depths to a depth of –17ft mean low water (MLW), representing a –15ft MLW project depth, plus an additional 2 foot allowable over depth dredging. In December of 2008, Ms. Engle obtained the support of the yachting community by demonstrating how navigation improvements would enhance the ability for marina owners to attract larger vessels to Broward County and the City of Fort Lauderdale. In addition, in partnership with FIND marinas could improve access to their facilities and deepen their berths for larger yachts.LXR Luxury Marinas owned and managed three marina projects in Fort Lauderdale, totaling approximately 400 slips. The marinas include Hyatt Pier Sixty Six, Fort Lauderdale Hilton, and the Bahia Mar. Bahia Mar is presently operated by RCI Bahia Mar.

The project was split into three phases because of natural resources within the AIWW portion. Phase one was complete in 2013 by deepening the Dania Cutoff. The AIWW and the New River deepening are still in the permitting and implementation stages.

All Aboard Florida rail service from Miami to Orlando

In early 2014, EnviroCare was hired by several boatyards and marine businesses west of the Fort Lauderdale FEC railroad bridge to assist those documenting impacts from additional railroad train usage and to identify mitigation measures to avoid any negative impacts. The services expanded to a coalition of concerned Ft. Lauderdale Area Property Owners, Boaters, and Marine Industry Businesses. The coalition’s objective was to review the suggested improvements to South Florida’s multi-modal transportation system and make recommendations to sustain a high quality of life, economic prosperity with the ability of moving goods and people while not impacting mariners’ interests. EnviroCare assembled and engaged a professional team of multi-disciplinary professionals to represent the coalition of marine and residential interests directly affected by rail bridge operations.

On December 3, 2014, EnviroCare submitted to the Federal Railroad Administration a comprehensive comment and objection report to the Draft Environmental Impact Statement prepared on behalf of All Aboard Florida (AAF) Project. EnviroCare’s report was advocating for constructive solutions to future rail planning and construction.